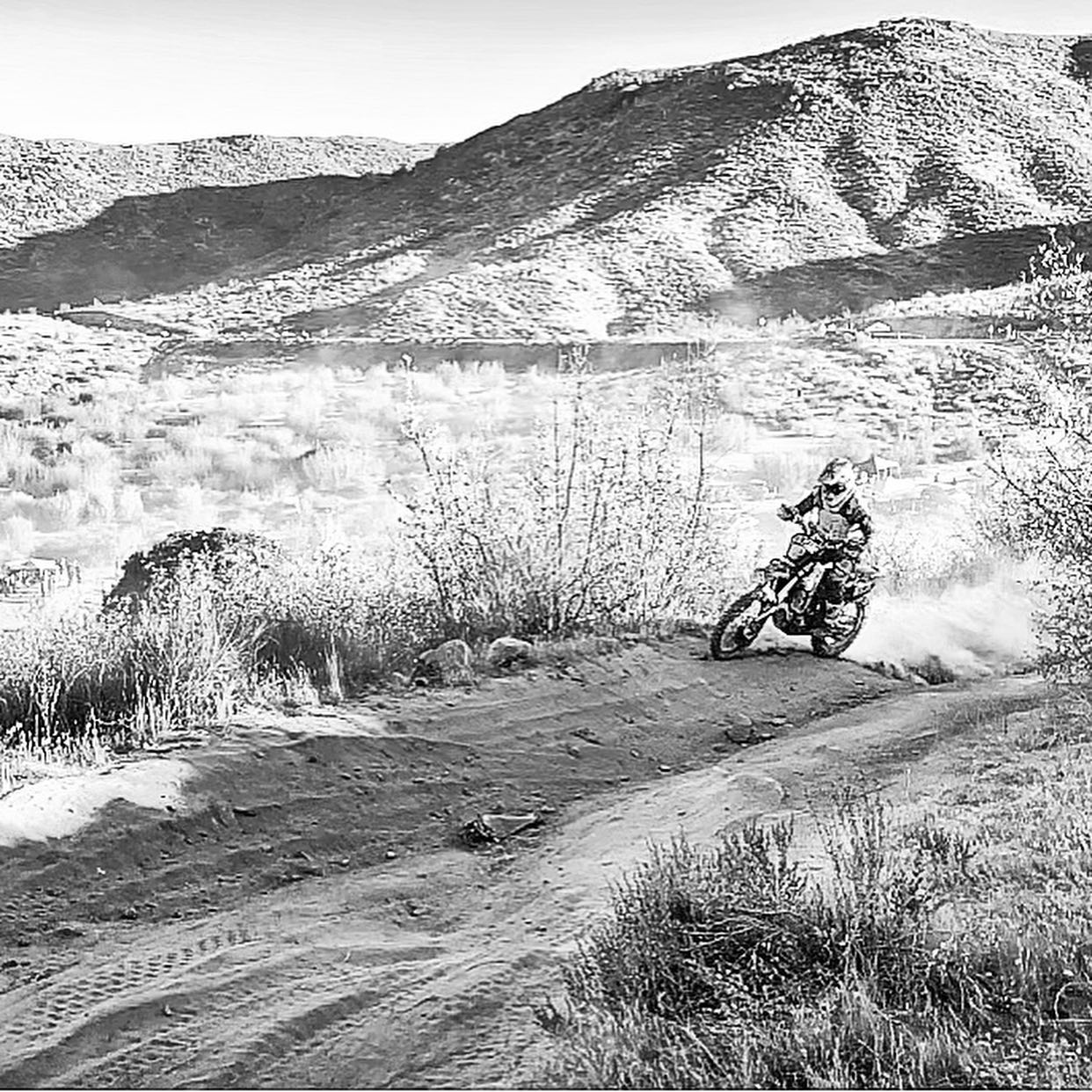 9am.... 3 hrs into spectating my first off-road vehicle race. This one is in the Mexican dessert. My second race stop today at mile 70 of the SCORE Baja500. The sun is hot but I’m sitting cozy-like in the shade of chaparral. BBQs grilling carne asada are just starting next to the tents of the local Mexican vendors. Support crews for the motorcycles and quads are pulling out and spectators and support crews in anticipation of the trophy trucks arrive.  My naïve guess, the trophy trucks begin to roll through under the mid-day melt. (Note: they were faster than I guessed and started arriving around 11am.)

The dust has now settled from the motorcycles and quads that began at sunrise. I enjoyed watching them navigate the turns and terrain of the course at mile 40. My jaunt down into the canyon off the cliff, past spectators, allowed the fun photos right along the race trail.

Here at mile 70, it’s a right-hand turn onto the highway for a chunk. A flat straightaway of dirt allows for high amounts of speed before gears go down to slow before the turn. I wandered a mile up, curious to experience the rumble and thrill of the speed. Admittedly, when a few small pebbles were felt on my body as the quad racer passed, a smile grew knowing I was close enough.

Earlier that morning I saw a bike come into their pit, yelling “gas, gas, I need a quick fill”. I’m SO green in this world of motto, off-road racing and pit crews... I was a sponge soaking it all in. I loved watching the energy of his crew in quick response to solve his problem. He was in and out in moments.

My heart broke for the quad surrounded by 10+ crew trying to solve an issue. At least two, if not three mechanics worked diligently with haste trying to correct the problem he was experiencing with his clutch. We all cheered as the driver rode off only to stop again 100 ft up the highway...the gears weren’t shifting as expected. With ~400 miles left of racing, he had to call it in the morning hours. I thought of all the prep and resources poured into to getting him to mile 70.

After cooling in the shade for awhile waiting for the trophy trucks to arrive, I approached a crew truck with an elaborate looking set up on top of their support vehicle and began asking questions. The two engineers in the truck enlightened me to a career path for mechanical engineers I had not been exposed to previously. It was fascinating to learn about product coming down the line, and their spin on the innovation brought to it as the engineers. The fuel truck was designed to fill the trophy truck in about 45 seconds and this was Robby Gordon’s pit crew. I guess he is a big deal in this world of off-road racing. Alway learning. They welcomed the idea for me to video him coming in. I’ll try to add it.

After watching Robby come through, I desired to be closer to watch the top speed these vehicles travel. I ran 2-3 miles up the flat race road, figuring that was far enough away from the right-hand turn they wouldn’t be slowing down.

The course was dotted with spectators who either camped out the night prior or drove up early to set up. They had shade tents, coolers, chairs and phones ready to take pictures of the racers. Always friendly, each group of spectators offered me beer and water. Eventually the 90 degree weather, a few miles of running in the Mexican dessert, and rather consistent dust from the passing racers had me accept my 12th cold beer offer. I stopped and enjoyed the company of a group of people so excited to be exactly where they were. After hours of spectating with vehicles approaching, and at times exceeding, 100 mph, cold beers, rib-eye tacos grilled over a campfire, I thanked them for their hospitality for the afternoon and began my way back. I joined an ice cream vendor headed back to the highway, walking along side his cooler on wheels. Both of us highly limited in the other’s native language but we laughed a bunch.

There’s an off-road racing culture to learn, a heat to be felt and the result is a stirring internally.

In my health coaching, I ask of my clients to dream. Together, we sit often in dialogue around what is possible. They come to me with concern around their health, my hope is they leave with inspiration, for their life.

When I was diagnosed with type 1 diabetes, the doctors told me my life expectancy was now shorter. That illuminated in me a deep desire to live a full life to the best of my ability as I figured I might be dead by 50.  I sit here recognizing how accurate that really is, I have experienced a type of death as I approach 50, spiritually. Not due to diabetes of course, just that midlife examination of questioning. I feel many perspectives about life, what I thought was true and what I thought was “right” had to die. I’m 48 years old and I’m kinda thrilled for what’s to come at 50 as I begin to see and feel the other side of this death.

To reach deeper into my humanity, grow my ability to embrace fear, dance tenderly with limiting beliefs and answer questions I haven’t even figured to ask, I’ve set a goal.

To be authentic to my character, it had to be a reach. The first person I told, the text was prefaced with “please don’t laugh”. He replied with “That’s a fantastic idea”.

Today I sit in appreciation for the possible (and campfire tacos), stay tuned...

One last thank you for all the awesome warm-hearted people who answered my 100s of questions today. I had an absolutely fabulous time spectating the SCORE Baja500 today.